Finished: Pajama Pants (or, Maybe Not) 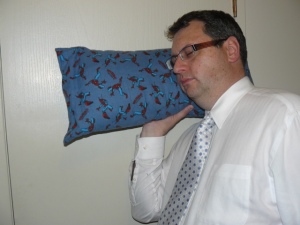 Stein and his pajama pants?

I completed the Spiderman Pajama Pants. As you can see from the picture they didn’t stay that way for very long.  (Look at him fake sleeping in his shirt and tie…they are so cute when they’re sleeping, aren’t they?)

I cut out the correct size according to Stein’s measurements but I could tell that they would be big so I sewed with generous seam allowances. He tried them on before I added the waistband and they were humongous. So I took them in as much as I could and added the waistband and put the elastic through. Stein tried them on again and they were still ridiculously massive.

What should have been pajama pants made to size turned out to be the worst-fitting pants he would own. So, I made a pillowcase.  I still have a 2nd pantleg left for a remote control cozy or some other Spiderman merchandise.

In other news. I am so excited to get my PBS done but all I’ve been working on are details like pressing on interfacing, adding ribbon to the tabs and reinforcing stitching lines. In other words, the only progress I can show on the skirt is this.

The plum colour really shows up in natural light, doesn’t it?  But I’ll keep working away on it and hopefully have an actual garment by week’s end.

In other other news, I just found out that a party I’m attending on Saturday is semi-formal.  (I haven’t received a formal invite just a verbal).   I’m so disappointed that I didn’t realize this earlier because I could have sewn something. I’m not like Tasia whipping up a party dress in 2 days. I also just bought tickets for the ballet in March. I plan on sewing a dress for that. I could have made it for both events if I had realized.  Maybe I’ll check my pattern stash and see if it’s possible.

I’m trying not to feel completely unsuccessful but with the failure of the pajama pants (my first Hubby project) and the slow progress on the PBS, I’m feeling deflated.  I plan to get some serious sewing in this week so I hope to have something to show by the weekend.

What I’m listening to: Age of Adz by Sufjan Stevens

3 thoughts on “Finished: Pajama Pants (or, Maybe Not)”