Previous Project: How It All Began

When friends find out that I sew they always say, “I didn’t know that you sew!”  And I always respond, “I don’t!”  I learned to sew in junior high school in home economics. I made a binder cover and a pencil case.  My big achievement was a pair of shorts that I made out of cotton that had a comic strip print.  I thought they were so cool. Then I didn’t sew again, outside of replacing buttons and shortening straps, until 24 or so years later.

In the winter of 2009 I bought a dress off eBay that was a little short.  I went to Fabricland and bought a wide brown ribbon and used sewing glue to add it to the hem. I notched it so it would follow the curve of the hem which was almost 3 metres long! The dress is a brown plaid with a slight silver thread running through it.  It came with black buttons (?) so I replaced them with two-tone buttons that were on the cuffs of my 15 year old wedding dress.

Two-tone button. And belt by me!

These two-tone buttons probably represent my personal style more than anything else that I own.  I love the modern shine of the gold but also the antique look of the centre filigree.  You can’t really tell if they are brand new or found in the bottom of grandmother’s button stash.  And they almost match my wedding rings perfectly. 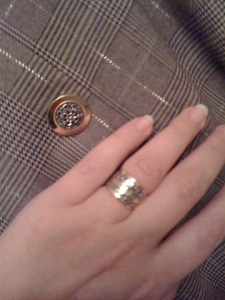 Two-tone is my life theme, I think.

After the success of the restyling of the dress I told my husband that if I had success with sewing glue, I could probably sew for real.  Stein did extensive research, we bought a machine off eBay (notice a theme) and I started sewing officially in May of this year.  Thanks to the encouragement of friends, my mom and my husband (who I would marry a million times over again) and the HUGE support and inspiration of the online sewing community, I have found such joy in sewing.

What I’m listening to:  Long Time Running by Tragically Hip (our wedding song)
“It’s been a long time running, it’s well worth the wait.”

3 thoughts on “Previous Project: How It All Began”